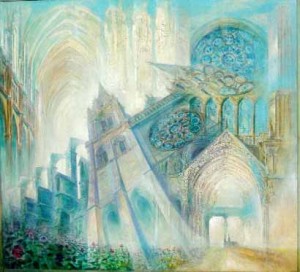 Maximalist artist Les Harris set out on a labyrinthine journey 40 years ago. Choosing to install his artwork rather than sell, his one room studio grew exponentially into a massive installation, drawing visitors from throughout the world.  One of his great loves was guiding guests through his 2,000 sq. ft. labyrinth where visitors were exposed to concepts ranging from the big bang, quantum, the primordial scission, numerology and non-local reality.  It now stands as a unified whole; a maximalist installation of over 250 pieces entitled the Amaranthine Museum, named after the unfading flower.  Over 100,000 visitors have joined in his journey through time.

Beginning with the contemporary consciousness of the 20th c. the labyrinthine installation displays a montage of known works, where each painting plays homage to a decade of artists, each grasping the breadth of the creative process. It winds back by the century, through thousands of images drawn from artistic masterpieces and cultural icons, all laid within a color wheel, the overall hue changing as the meticulously sculpted frame develops.  Winding through time, architectural and artistic styles, it shifts into the exploration of sciences, and ‘ologies’, back to the beginning of the

‘Age of Pisces’ and the birth of Christianity. Then, back thru the ages, thru the ‘Precession of the Equinoxes’c and beyond into the outer dimensions of mind and the origin of consciousness and the Word.   Les Harris began his journey painting Gothic Cathedrals. Architectural awe turned to Egyptian wonder as he explored the ancient mysteries with his pen and brush and translated them into contemporary consciousness peering through the eyes of artists through the centuries. Time and space were irrelevant and non-local.